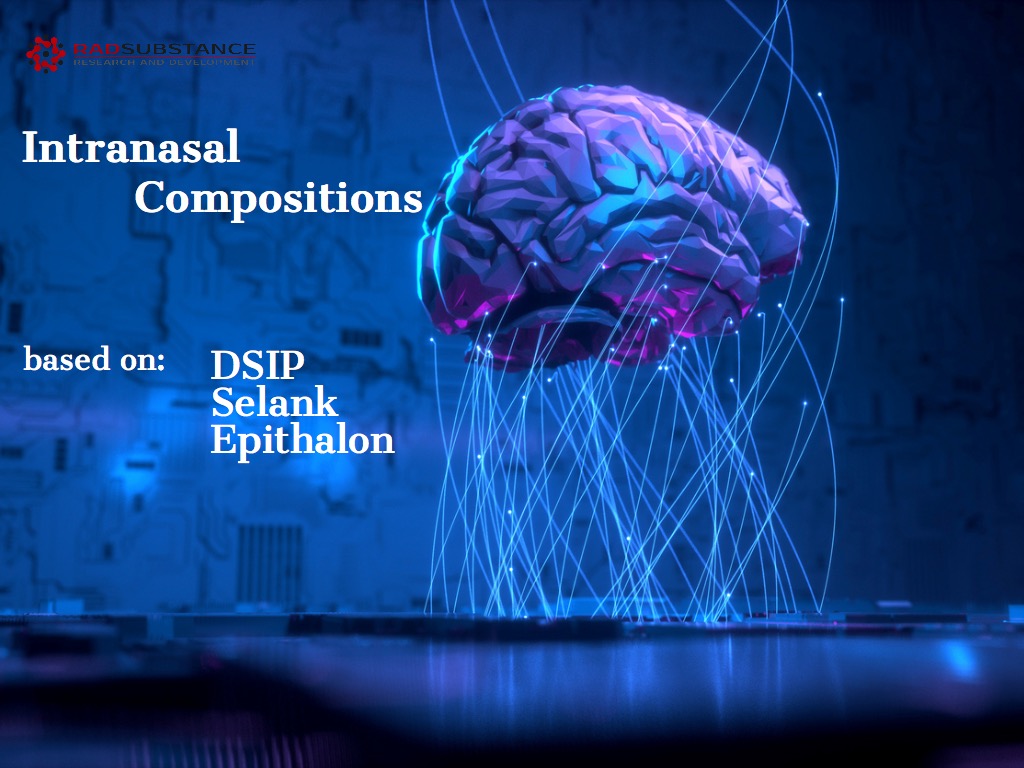 Certain neuropeptides administered to an organism have beneficial effects on sleep regulation, anxiety levels and overall health. Sometimes, combination of several drugs into one composition allows to achieve better therapeutic results due to mutual reinforcement or synergistic effects. Three peptide drugs have been noted: DSIP, Selank and Epithalon, which show similar effects on a body, but have different mechanisms of action. Moreover, these peptides exhibit activity being administered intranasally, which makes them convenient to use.

Delta sleep-inducing peptide (DSIP, Deltaran; Trp-Ala-Gly-Gly-Asp-Ala-Ser-Gly-Glu; CAS 62568-57-4) is a naturally occurring nonapeptide that was originally isolated from rabbit brain in 1977 [1]. DSIP is synthesized in hypothalamus and affects several brain areas [2]. As the peptide name reflects, DSIP promotes sleep, and this has been demonstrated in rodents, cats, and humans. DSIP promotes a special type of sleep that is characterized by an increase of delta frequencies of the human EEG waves. Cerebral and plasma DSIP concentrations show marked diurnal fluctuations; there is a correlation with circadian rhythm in humans that is low in the morning and higher in the afternoon. Compared to most other peptides, DSIP is outstanding for the reason that it can freely overcome the blood-brain barrier [2].

A number of studies have been conducted to test the hypothesis that DSIP may be a major endogenous sleep factor. DSIP has been reported to induces delta sleep, and this has led to the peptide being considered as a treatment for insomnia. However, the results of studies were controversial [3, 4].

DSIP may be useful in the treatment of narcolepsy, and it is possible that peptide acts via restoring circadian rhythms [5]. In a controlled, double-blind study single and multiple injections of DSIP led to normalization of sleep disturbances, and better performance and alertness observed during waking cycles, as well as an improved stress tolerance and an ability to get over the difficulties [6].

Neuroprotection was demonstrated in rats subjected to bilateral ligation of the carotid arteries. DSIP also reduced cerebral edema in a rat model. DSIP shows anticonvulsant effects in rats. This effect changes during a whole day, with a higher nocturnal antiepileptic activity.

DSIP attenuates emotional and psychological stress responses. This action has also been confirmed in humans for a dosage of 25 nM/kg [7], however, other researchers have reported no inhibitory effect on the adrenocortical axis under either physiological or stressful stimuli [8].

Side effects are rare and serious reactions have not been reported. Headache, nausea, and dizziness were reported by volunteers in some studies.

Selank (Thr-Lys-Pro-Arg-Pro-Gly-Pro; CAS129954-34-3) is an approved and producible drug, which is a regulatory nonapeptide characterized by nootropic effects and which is a synthetic derivative of Taftsin [13]. Selank was developed by researchers from the Institute of Molecular Genetics of the Russian Academy of Sciences [14]. The drug is characterized by mixed effects; anti-anxiety (anxiolytic) action is combined with activation of cognitive and mnemonic functions.

Selank proved to be a prolonged-acting psychostimulant with immunotropic activity at a dose of 70–1200 µg/kg in rodents [15]. It reduced the level of behavioral disorders in experimental animals and decreased immobilization periods [15].

Anxiolytic effects were observed at 100­–500 µg/kg administered intranasally to rats and the effects were comparable to injections of the tranquilizer diazepam (1 mg/kg) [16]. The anti-anxiety activity was revealed in experiments on the contradiction of defensive and food reflexes, as well as in the elevated cruciform maze test. Intranasal single-dose administration of 0.3 mg/kg improved learning and activity in rats [16]. Selank (0.3 mg/kg) significantly reduced antioxidant enzyme activity in a rat model of chronic emotional-pain stress [17].

Selank (nasal drops, 0.15%) performed positively in the treatment of essential tremor [18]. As a result of clinical studies, patients showed favorable dynamics, reacted more adequately to their surroundings, and improved dynamic praxis scores. Similarly, Selank helped to improve patients’ adaptation to their everyday life [18]. A decrease in lassitude and tremor was shown and a generally positive trend was observed in parkinsonian patients and the tendency maintained once the therapy was completed [19].

It was shown that intranasal Selank administration from 30 to 100 µg/kg has a cerebroprotective effect, reduces anxiety, and improves memory in monkeys with interhemispheric asymmetry of the brain, neurotic symptoms and cognitive disorders on the background of anxiety states [20].

Intranasal Selank administration (0.1% solution) has a positive effect on libido and stimulates sexual function, which has been shown in female volunteers [21]. The effect occurred within 10 days, aversion to sexual intercourse disappeared, orgasm episodes became more frequent, but hypersexuality was not observed.

The immunotropic activity of Selank was manifested by an increase of up to ~20% in the macrophages’ phagocytic activity without signs of toxic effects [15]. Selank demonstrates cytokine- and interferon-inducing properties in vitro that can activate immunity [22]. Selank at concentrations of 10-6 M demonstrates antiviral effects in vitro and in vivo with efficacy close to that of an interferon inducer ridostatin against influenza (strain H3N2) and herpes type 2 viruses [23].

Selank (nasal drops, 0.15%) is approved in the Russian Federation as an anxiolytic without myorelaxation or sedation, which is prescribed for a number of extrapyramidal conditions (ЛСР-003338/09-300409, manufacturer: Innovative Research and Production Center “Peptogen”).

Epithalon (Ala-Glu-Asp-Gly; CAS 307297-39-8) is a tetrapeptide derived from the bioregulator epithalamin [27, 28]. Epithalon was developed by a group of scientists at the Saint Petersburg Institute of Bioregulation and Gerontology [29, 30].

Epiphysis is an endocrine gland that produces an important hormone, melatonin, which modulates sleep as well as seasonal and circadian cycles [31]. This hormone acts as an antioxidant and stimulates immunity [32]. Epithalon enhances melatonin production, as has been shown in primates and humans. Epithalon is about 50 orders of magnitude more effective than epithalamin in enhancing of nocturnal melatonin secretion [34].

Intranasal administration of 30 ng Epithalon as a solution acts on the frequency of spontaneous activity of rat cortical neurons [35]. Significant activation of neuronal activity was observed a few minutes after peptide administration. Epithalon acted on existing active neurons, and recruited previously silent neurons. Besides, at least the first peak of increased neuronal activity after exposure to Epithalon is attributed to the direct action of the peptide on cortical cells [35].

Epithalon has not yet passed the research stage and is not registered as a drug, nevertheless it has good potential for that. Epithalon can lengthen telomeres [36, 37], alleviate the symptoms of atherosclerosis, and improve human cognitive functions [38].

Each of these three peptides has significant potential to modulate human well-being. The peptides normalize sleep, enhance immunity, stimulate tissue regeneration, have a neuroprotective effect, and protect against stress. At the same time, intranasal administration increases peptides’ bioavailability and is noninvasive, which is important for self-administration by patients. The combination of two or more peptides in one composition can lead to a new, even more effective drug, as a result of the mutually reinforcing (synergistic) action of the components.

DSIP and Selank peptides already have been sufficiently studied by now and have been used as intranasal drugs for a long time, therefore, the composition based on these two peptides seems to be the most interesting in the first place. Epithalon is not as well studied for intranasal use, but there are some known promising results of preclinical trials. The main perspective indications for the use of DSIP+Selank and DSIP+Selank+Epithalon compositions are as follows: